Contemporaneity
The idea of designing a sans-serif typeface whose use permits a perfect combination with serif typefaces is a common practice in the design of contemporary newspapers.

Versatility and communicative capacity
In Multi Display, the range of weights and proportions, from a slightly condensed Thin to a slightly expanded Poster, provides expressive qualities to the headlines, regardless of the size of use. Where Multi Thin is delicate and soft, Multi Poster is robust and strong. And although all share the same skeleton, each weight has its specific touch.

Legibility and rationality
Multi x-heights are generous along the whole family, but are higher in the Multi Text version, which also has a more rational construction with discarded expressive details.

Dynamism, optimism and originality
Multi has a number of special features that differentiates it from other sans-serif typefaces, because it has a kind of handmade quality that is reflected in a number of details: the slight flare and asymmetry of the stems; the tilted base; or the relevance that acquires the notch, from almost imperceptible to remarkable, when increasing weight. This gives dynamism to the words and the text. 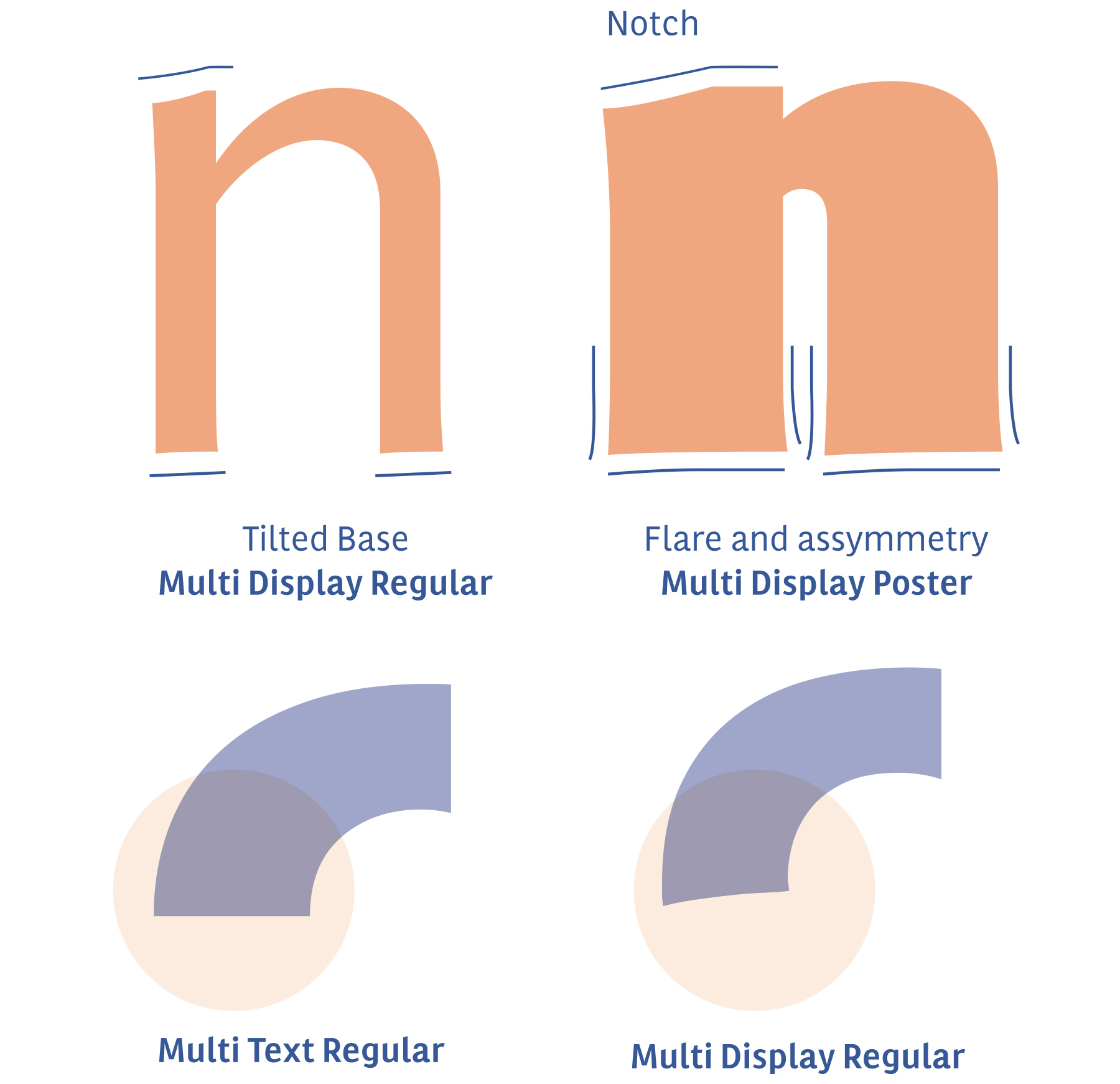 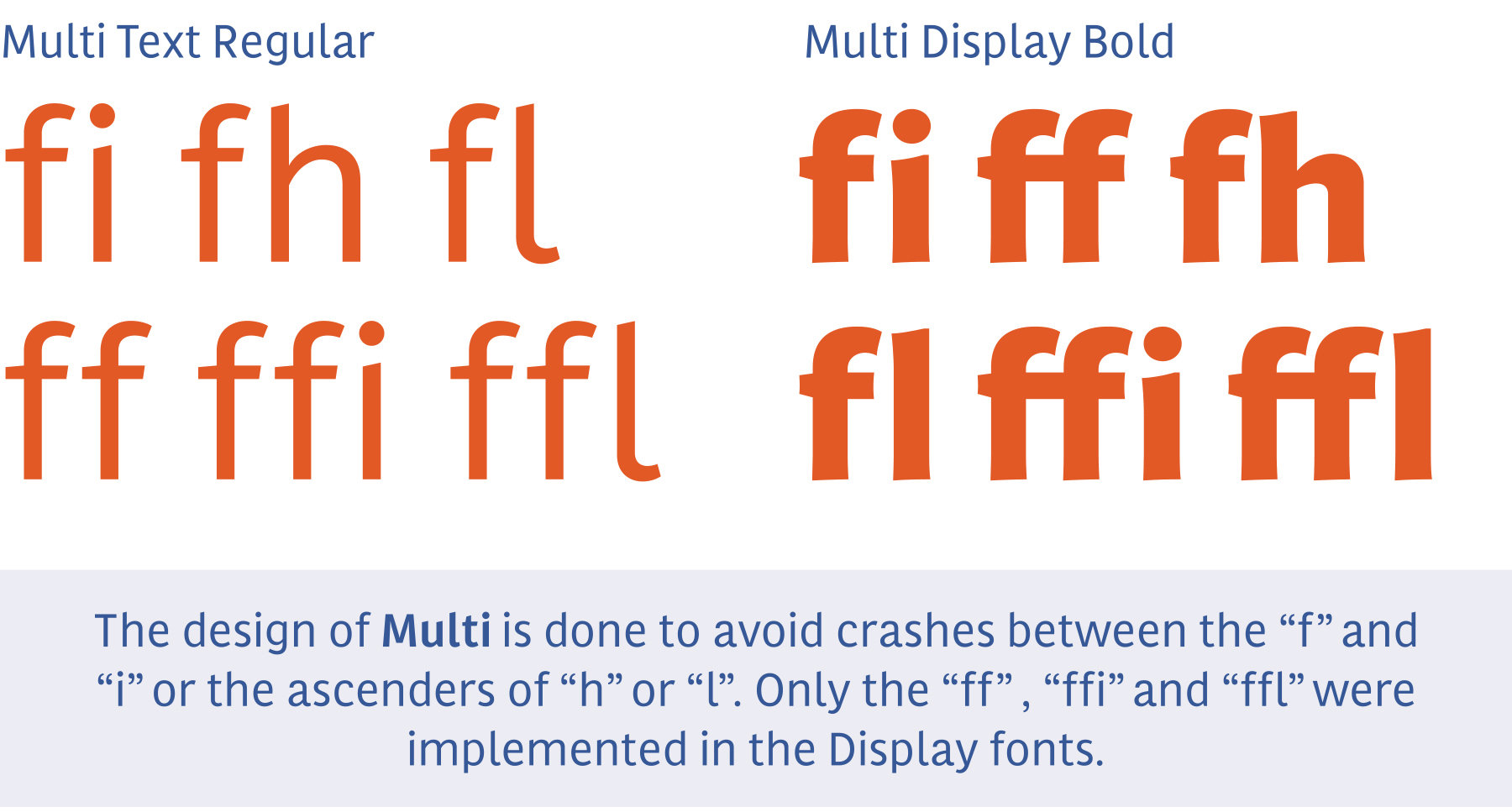 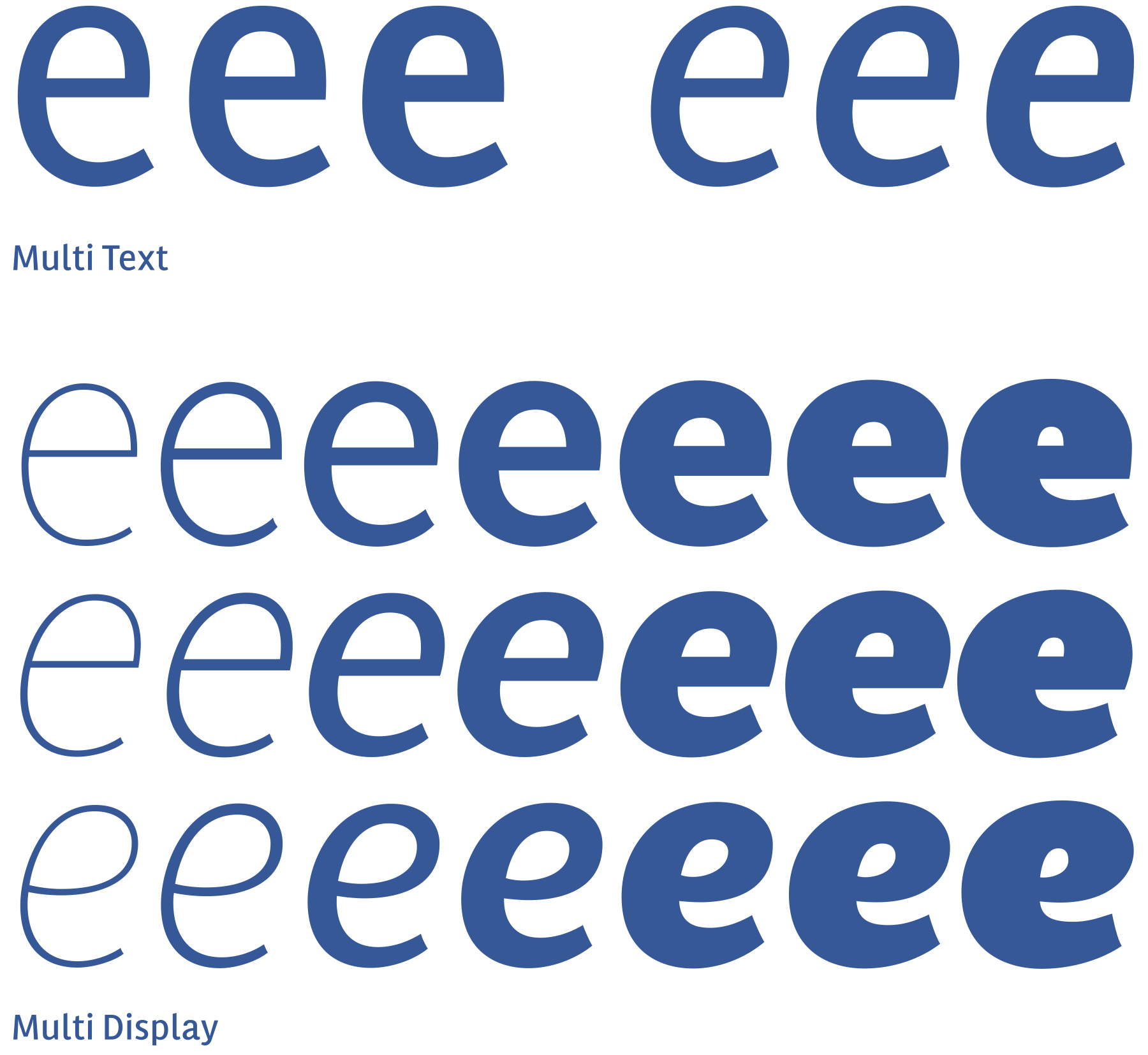 Proportions and economy
A typeface for newspapers must be economical and extremely legible. To be “economic”, a printing typeface should allow more characters per line and more lines per paragraph, compared to other fonts used in the same conditions. Multi ratios are slightly condensed for this reason, with short ascenders and descenders. Good readability is achieved with a generous x-height and balanced contrast. The proportions of each subfamily vary.

Thus, Multi Display — primarily thought for headlines— has a generous x-height of 540ems, short ascenders and descenders, a greater care in drawing detail and a more pronounced contrast than in the text version. Multi Text is primarily designed to work with small texts (numerical lists, for example); it has a height x large 575ems, and, although it has also short ascenders and descenders and a slight condensation, is wide enough to work effectively at 6pt.

Contrast
Multi is a humanist sans-serif, which is manifested in a moderate contrast, slightly accentuated at heavier weights, especially in the subfamily for headlines. The contrast that has been defined for regular weight of both subfamilies is the one required for newspaper, it is light enough to preserve the uniformity and sufficiently pronounced to be faithful to the vitality of the original sketches.

Ligatures
HDC Media’s newspapers were produced by CCI production system, which imposed certain restrictions on the format of the fonts. The final font files had to be delivered as TrueType and not OpenType, then the implementation of special and alternative character ligatures had to be excluded. Therefore Multi Text is designed to not require ligatures: the ‘f’ will not clash with the ‘i’ or the ascenders of ‘h’ or ‘l’. The retail version is OpenType format, and it’s much more versatile, although no ligatures were added in the Text version, only some in the Display fonts.

Italics
The use of italics in newspapers is rare, so it was decided not to include them in the custom Display version, but now they have been designed for the retail version. Both Multi Display and Multi Text are equipped with moderately sloped real italics for all the weights. Besides all Multi Display fonts, have an alternative character ‘e’.

Upper case
The news are full of names and acronyms, written in upper case. Multi has no Small Caps, but, to achieve this versatility, the upper case letters have been designed relatively small so that the texts have a uniform colour.

Proportional and Tabular figures
Multi Display Figures are only Proportional and Multi Text has both, proportional by default and tabular, as they are intended to be used in tables and lists, thus avoiding the use of tabs.

Webfonts
All Multi fonts have been optimized as webfonts, but for Multi Text hinting has been done manually, to assure a optimal reading in all browsers.